in defense of the Political Teen

in defense of the Political Teen

Update: Welcome, Michelle Malkin and Hugh Hewitt readers. Sorry the place is such a mess, the maid is on vacation etc.

Drudge pointed out some shenanigans at CNN during the live coverage of VP Cheney's speech the other day. There was a large black X superimposed over the vice-president's face during the speech, for just a few frames. The Political Teen had a slow motion version of the incident posted to his site.

Jeff Harrell noticed something peculiar about the video at TPT's site: the X slowly faded in and out. Jeff had assumed that TPT had accomplished the slow-motion effect by simply repeating frames (ie 1, 1, 1, 1, 1, 2, 2, 2, 2, 2, etc), so such a fade-in/fade-out simply didn't add up. Below are the six frames from the Political Teen's video that Jeff posted on his site demonstrating this fade effect, enlarged by 50%. 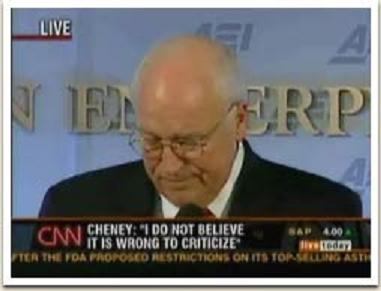 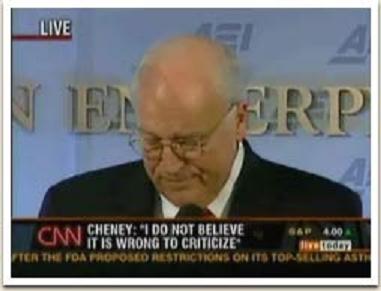 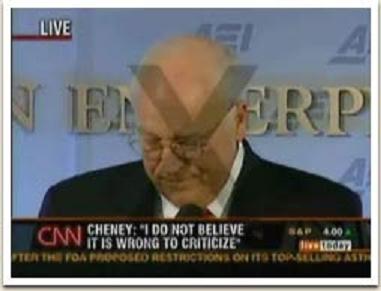 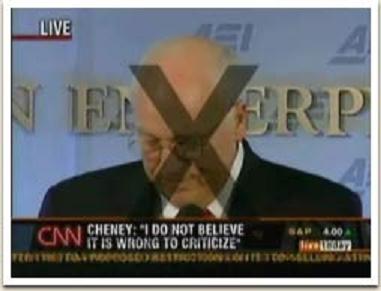 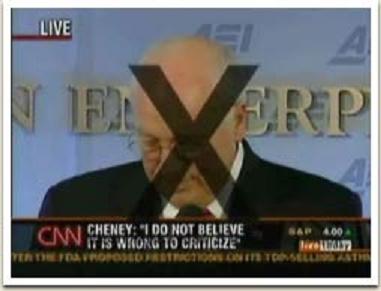 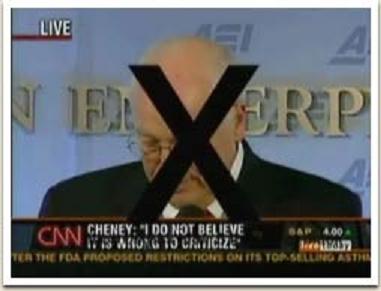 This anomaly upset Michelle Malkin, who holds the Political Teen in high regard, and therefore is disquieted by the idea that TPT may have doctored the video. Well, Michelle and Jeff can rest easy.

The explanation is that Jeff's assumption about the creation of the slow-motion version is incorrect. Rather than simply copying frames several times, the slo-mo was produced by following a formula like this:

...and so on. The fade-in/fade-out effect is an artefact of the process used to produce the slow-motion version of the video.

The scrolling text at the bottom of each frame shows this is the case. Compare the lettering in frames 31, 34, and 36:

Here it is easy to see that frames 31 and 36 are old original frames, and frame 34 is the superimposition of the two frames. The Political Teen did not doctor the video: the fades are a result of the process he used to make it slow-motion. I presume this is the standard technique for WMV format based upon my own experiences with video compression in putting together my robot video.

Before I pointed this out (in an email) to Jeff, he had posted a request for a higher-resolution, 30 frames per second version of the video. Well, that's probably not going to happen. The Political Teen's version is compressed using WMV format, bringing it down to a mere 93k. Had he posted an uncompressed version, it would be much larger. Suppose he had posted a 30 frames per second, 24 bit color, 512x384 (typical TV) resolution version of two seconds of video - that's about the length of the source he used - without compression. That works out to 30x3x512x384 bytes, or almost 36 megabytes for the two seconds of video - and that would be at regular speed, not slow motion. That's a lot of bandwidth to use for two seconds. Even if he did it at a 256x192 resolution, it is still 9 megs if it isn't compressed. If it is done in (1/5x) slow motion, then multiply that file size by 5. Considering the amount of traffic the Political Teen gets at his site, it just isn't going to happen.

Technorati Tags: Politics, Video, Media
Posted by Ed at 11/22/2005 01:56:00 AM
Email ThisBlogThis!Share to TwitterShare to FacebookShare to Pinterest

Cheney and the X-Files

Polunatic said...
This comment has been removed by a blog administrator.
9:25 AM

Let me offer my technical concurrence. A number of video editing programs preform intra-fram interpolation to improve the slow-motion looke of video. Robot Guy demonstrated that this is exactly what happened. -EMG